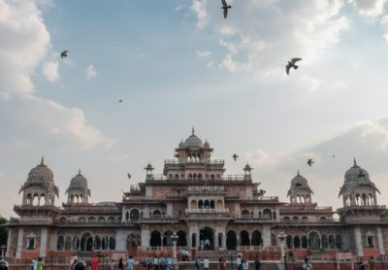 Jaipur a sea window palace that has its beauty and the beautiful architecture of the diverse temples and historical spots that are popular in the world as the sites in Jaipur is perhaps the most special of its kind. Travelling here is not only limited to the best cafes in town or the largest shopping centres but is a full-round journey to culture, dedication and view of life, the most stunning structures in the world with Jaipur Tour Package. There are numerous colours of the city, and the city Jaipur draws visitors in significant numbers for travelling, which gives the city a sense of pride. Jaipur’s sightseeing doesn’t just stick by exploring forts and temples like other places as the calmness of Jaipur has the blend of all the popular stuff the tourist has the vision to discover! The majestic forts have their own ancient significance and give a tourist the historical knowledge such as:-the Hawa Mahal, Amber fort, Nahargarh etc. Rajasthan’s special culture called “PadharoMahareDesh” that gives a visitor a chance to stay with locals and the caring love that offers them a picture of a wonderful city to appreciate and discover again.

Hawa Mahal– The most prominent monument in Jaipur, built by Maharaja SawaiPratap Singh in 1799. A work of Rajput heritage is the 5 famous ravishing semi-octagonal monuments which have 152 windows with overhanging window balconies. This is specifically built for the royal ladies to look out for the street celebrations and the events that are held outside.

City Palace – It is located in the old town of Jaipur, as it encompasses around a seventh of the old town area. Palace is a combination of Rajput and Mughal architecture it houses in the middle a Seven-Storeyed Chandra Mahal that offers a magnificent view of the gardens and the city. Diwan-E-Am (public audience hall) has elaborate designs and manuscripts set, Diwan-E-Khas (private audience hall) has a marble-paved hallway Mubarak Mahal has a large array of costumes and textiles.

Nahagarh Fort- The fort was constructed in 1734, on top of a hill about 600 feet above the town. The fort’s walls extend around the hill, and there are architectural beauties such as Hawa Mandir inside. It is the place which youngsters in the city go for long rides. So explore the serenity of the fort in the city of Jaipur.

GovindDevJee Temple- Jaipur is also called the’ City of Temples’ for its numerous temples. GovindDevJee, one of Jaipur’s ancient temples, is devoted to Lord Krishna and is visited every day by millions. This temple is situated on the City Palace grounds and exhibits magnificent sculpture.

Jaigarh Fort- On the expanded Aravalli hill of the ‘Cheel Ka Teela’ another magnificent beauty, built by Maharaja Jai Singh II! Jaigarh Fort was designed to defend and improve the protection of the famous Amer Fort which was the residence of the Rajput royal family. This Fort derives its name from the Maharaja, but was also one of the cannon foundries of the kingdom of Rajput. Besides being a fortress built for defence.

Jantar Mantar- An historic Jaipur shrine that houses a set of 19 astronomical stone instruments. Jantar Mantar simply means ‘heavenly peace steps’ and these two (apparently) mystical terms help to define a special place that demonstrates the connection between science, space and humanity. In order to reliably forecast the locations of celestial bodies and determine astronomic agenda, Jantar Mantar was established at the beginning of the 18th century by the Maharaja in Jaipur Sawai Jai Singh II.

Jal Mahal- This magnificent building, which literally means a ‘water palace,’ is located in the vast region of Jaipur’s Man Sagar Lac. The palace’s architecture is in the ‘Rajput’ style and exhibits distinctive red sandstone examples, finesse in construction, and the work of detail. The palace has five levels, 4 levels are deep in the water and the top floor, easily visible above the surface of the pool.

Amer fort– Amer Fort is an important part of every Jaipur tour kit, one of the finest and most magnificent forts in Jaipur, but also the entire world. The house is situated on top of a hill overlooking the Maota Lake in the pictorial town of Amer in Jaipur, Rajasthan and is the main source of water of the city. The magnificent palace consists of many beautiful buildings and courtyards on 4 floors.

Jaipur Tour Package is packed with royal cuisine from Rajasthan countryside, unrivalled infrastructure and sheer rich culture will be enough to make Jaipur a world-class attraction. And yet there’s so much more to this place. Jaipur is filled with mesmerising markets, richly adorned elephants doing their work effortlessly, captivating cultural concepts and a maze of vibrant dream palaces at every stop. Jaipur is a city focused on tourism. Visit it and soak in the peacefulness of Rajasthani Culture’s royalty.