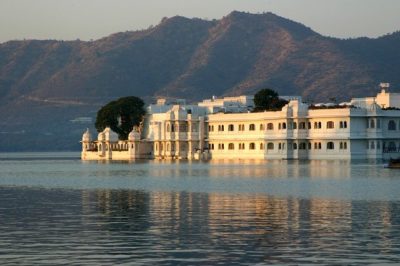 The city of Udaipur has always evoked the romantic in me! The picture-perfect palaces, lakes and temples scattered across the city have amazed me to no bounds. The palaces in Udaipur are known across the world for its splendour and magnificence.

Just like Jaipur is popularly known as the Pink City, Udaipur is known as the white city due to the presence of white coloured houses. The city is known for its association with the personalities like Maharana Pratap, Rani Padmini, Meera Bai, all belonging to dynasties that have ruled the city for centuries.

Places to visit in the Royal City of Udaipur:

The City Palace is one of the largest palaces in Udaipur. The palace complex islocated on the banks of Lake Pichola and has several palaces. Its construction began in 1553 by Maharana Udai Singh II of the Sisodia family when he shifted his capital from Chittor to Udaipur. In the present times, a part of the palace has been converted into a museum, open to the general public. Important monuments like the Lake Palace, Jag Mandir, Jagdish Temple, and Monsoon Palace are all in the vicinity of the palace complex. These landmarks are associated with pop culture as they were seen in the filming of the James Bond movie ‘Octopussy’.

Lake Palace is another famous attraction; the Lake Palace was converted into a hotel right in the middle of Lake Pichola. One can enjoy the view of this hotel from most areas around the city like the Lal ghat, Gangaur Ghat and Hanuman Ghat. Only guests of this hotel are permitted to enter the property. The pure white palace in Udaipur is an impressive sight especially at night when the palace is lit up giving you a perfect silhouette in the water.

This floating palace is truly a sight to behold, known as Jagmandir or Jag Island Palace is located on the southern side of Lake Pichola and occupies the island that is popularly known as Jag Island. The palace is also known as ‘Lake Garden Palace’ and there are many impressive structures within the palace complex that are sure to leave any visitor spellbound.  This island palace in Udaipur receives a huge number of travellers for its natural and scenic beauty.

Bagore ki Haveli, is an old ‘haveli‘ or quest house that has been converted into a folk-art museum. The folk dance and music programs hosted at the haveli every evening is worth a watch during a trip to Udaipur.

The Royal Vintage and Classic Car Museum is a museum owned by businessman and member of the royal family, Arvind Singh Mewar and it is located in Udaipur. The museum displays some of the rarest classic and vintage car collections. One can see vintage cars along with the new experimental solar rickshaws at this museum.

6. Shopping in the White City

The city has several old bazaars and little shops selling artefacts from all over India. One can buy miniature paintings and silver jewellery. Prepare yourself in the art of haggling to ensure that you get your desired product at a good price rather than the tourist price.

The city of Udaipur has converted all its old buildings and Havelis into heritage hotels.

The city welcomes travellers from every part of the world. Udaipur is home to some of the most luxurious properties in the world that are known for its superb architecture and world-class services.

Most hotels and restaurants in the city of Udaipur serve cuisines from all over the world from pasta to sizzlers to curries. The Rajasthani traditional thali native of the region is a must-try during a tour to Udaipur.

9. Lakes in the city

The major lakes in Udaipur are Lake Pichola, Udai Sagar Lake, Fateh Sagar Lake, Rajsamand Lake and Jaisamand Lake. The city has there are smaller lakes like DoodhTalai, Badi Ka Talab and Kumharia Talab. These artificial lakes in the city reflect the ancient water conservation and preservation practices of the olden times.

If you would like to experience the lifestyle of the royals, then Udaipur is the best place for you. The grand Havelis and palaces in Udaipur will give you a glimpse of the Rajputana architecture and culture. Be it the typical Rajasthani lifestyle, authentic Rajasthani food, or the stunning lakes; Udaipur has it all.